A Chinese University of Wisconsin-Madison PhD student was attacked and roughed up by what appear to be four minority locals early last week — the third such assault in the last two weeks — but, at least so far, authorities say it’s not a hate crime.

On Tuesday evening the student was knocked to the ground by the assailants, who then proceeded to “kick and punch him,” WGLR reports. The suspects did not take anything from the victim.

According to the Madison Police Department incident report, “detectives have no information that leads them to believe th[e] attack is racially motivated.” This and the previous assaults appear to be “random in nature,” it said.

In a translated statement, the victim said his attackers (pictured), “some of them black, some of them white,” left his face and ear bleeding.

“I didn’t even apply to any of the California/New York/Southern schools for safety concerns,” the student said. “I also decided to live in the most prosperous part of Madison. But tonight, whether it was racial hatred or common school violence, it still came to me. [The assailants] didn’t say a single word, didn’t try to rob my stuff, they just dragged me to the ground to kick me.” 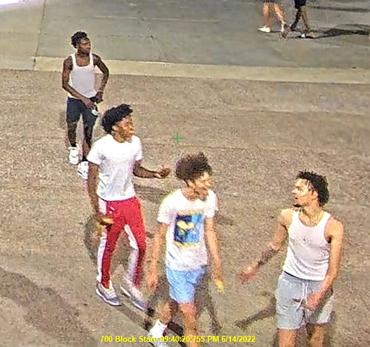 The university responded to UW-Madison student Luhang Sun’s tweet about the incident by saying the attack was “deeply concerning.” It added that it will “continue to work to create safe, equitable and inclusive working, living and learning environment” for everyone on campus.”

A Chinese male student was beaten by FIVE random young men yesterday on University Ave. close to @UWMadison campus. We feel extremely disappointed about what happened to him. And this isn't the first Asian hate crime at UW-Madison. @uwchancellor #StopAsianHate #HateCrime pic.twitter.com/G6o0RNhlDo

Despite what law enforcement has said about the attacks, student Jiayi Chen wrote on Instagram that “incidents with such racist nature are not something new on campus.” She also complained that the university did not send out an alert about the assaults.

In a statement issued by the Associated Students of Madison, Nominations Board Chair Steven Shi said the university and the city should “pursue policies to avoid future crime [against Asian & international residents] of a similar nature from ever happening, and to forge a safer, more welcoming Wisconsin for all.”

The Badger Herald notes there will be a gathering to protest the attacks on Friday, June 24.