BOSTON — When Jeffrey Suddy, a senior at the University of Massachusetts Boston, first began attending the school last year, he noticed something missing on his campus: an American flag flying high above school grounds.

As a student veteran who served eight years in the U.S. Air Force, he said he feels strongly about defending Old Glory, and now as a political science major and president of the College Republicans, he is leading the charge to raise one on campus.

“On a personal level, this campaign is very important to me,” he told The College Fix via email. “[H]owever, the greater issue at hand is the institution’s failure to comply with state and federal statutes for more than three years.”

According to the United States Flag Code, an American flag should be “displayed daily on or near the main administration building of every public institution.”

Suddy launched the “#WhereIsTheFlag” campaign, and a bipartisan coalition of student groups has since gotten behind the effort.

“The effort to bring new flag poles on campus is a non-partisan initiative that has found support in various political and apolitical student groups. The Undergraduate Student Government has even passed legislation asking the administration to install two new flag poles in front of Campus Center. We have even received great encouragement from the UMB Police Department,” he said.

University spokesperson DeWayne Lehman said a flag was once flown on campus, but had to be taken down due to construction.

“Over the past 10 years the UMass Boston campus has undergone extensive construction as part of a master plan to significantly improve the campus, including multiple new facilities, all new roadways, and new landscaping across most of the campus. Throughout this project the most prominent flagpole on campus needed to be removed temporarily to complete the work,” Lehman told The College Fix via email.

“Having a large, prominent flagpole is important to the university, and now that most of the construction is complete, a process is underway to identify a permanent location for it. The flagpole will be installed as soon as possible after a permanent, appropriate location is identified,” he continued.

Suddy said a “conversation is definitely taking place” between the pro-flag coalition and campus leaders.

“At the moment we are trying to work with the administration and give them the opportunity to work with us on this very important issue,” he said.

“We determined that the flags came down when one of the utility buildings adjacent to Healey Library went under construction. However, those flag poles were not saved and no plan was developed to install new ones,” Suddy said. “Based on the conversations I have had with administrators, the intent was to relocate the flagpole that is near the women’s softball field to a location near the dormitories. Unfortunately this location does not satisfy the various legal requirements that the university must meet under Massachusetts and federal law.”

Meanwhile, the only thing standing in the main quad is a massive brown fiberglass statue of a steelworker, meant to represent “the struggles of working-class people,” according to a description on the UMB website. 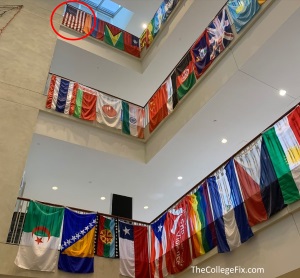 The one American flag displayed on campus is located in the campus center. It’s a small one in the corner amidst dozens of other flags. UMass Boston is considered an international school.

Sara Wulff, coordinator of the Student Veterans’ Center, told the student paper The Mass Media that it may take about a year to get the U.S. flag its permanent and proper home on campus.

“The university’s administration needs to get the funding for the flag poles and the flags, and the cost of installation squared away first. Then, they need to finalize where it is that they are going to put the flag on campus. Personally, I would like to see the flags right in the front of Campus Center on the new green space. It is one of the most highly photographed locations on campus that the university uses for advertisements, and it’s a location that you can see the school from the bridge, highway, and harbor,” she stated. About the Author
William Nardi
Will Nardi -- UMass Boston